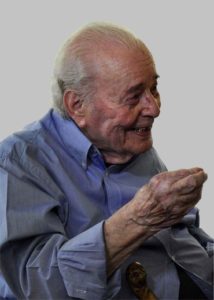 I was born in Berlin on 9 August 1909, the son of Walter Gérard, a German scientist of Huguenot origin and the famous Italian singer Mafalda Salvatini.

I started to draw before I knew how to read and write and when the First World War started in 1914 I cheered my father up with my first character sketches. Later, a strong interest in the human figure incited me to characterise my teachers, representing them in animal versions and from then until now I have always leaned towards this predilection.

Later I discovered the medium of colour during my journeys from the south of Italy to North Africa and the northern countries. Greece and the Odyssey already belonged to my youthful dreams, causing consternation from my worried parents – “An artist! No! A job, please! Not a vocation.” – they insisted.

We opted for medicine with a strong emphasis on the exact science, neglected until that moment, but supplemented with Philosophy and Logic.

“The boy, before everything else, has to think in a clear way,” declared my father, convinced that I must have a good preparation for the challenges that the future would certainly have. But things didn’t go at all like this!

Meanwhile, in Germany, Nazism had spread and the mass of Brown Shirts had started to yell incredible things.

In 1932 I was in Oxford, one of the few oases still adhering to freedom of expression, and from that privileged observatory I realised what was really going on in Germany.

In 1933 the situation worsened to the point that it forced me to flee Germany and go to Paris. The Sorbonne was, of course, very attractive and in Paris I was fascinated by painting.

But there were my studies to finish. In 1937 I graduated in medicine in my beloved Basel where I had found the required concentration and shortly afterwards, I moved to London. The artistic environment, that, for domestic reasons, surrounded me, incited my interest towards music and the theatrical world and it was there, I presume, that art prevailed on me. Later, during the Second World War, the great lack of doctors gave me, at last, the opportunity to practise my profession, especially as a First Aid doctor.

Among the roar of weapons, I met the famous director Peter Brook and started to collaborate with him. In the height of the war I also met Oscar Kokoschka, a wonderful man from whom I learned a lot – I took lots of advice! At the end of the war I met Peter Brook again for the setting up of Romeo and Juliet at Stratford upon Avon, Shakespeare’s birthplace. I became a British citizen and a little later I had the honour and joy to exercise the activity of set designer for some of Mozart’s works for the Glyndebourne Opera in Sussex and again in Edinburgh.

In 1950 I was called to New York by the newly elected director of the Metropolitan, Rudolf Bing, to set up the Verdi opera, “Don Carlos”. It was the beginning of a collaboration that lasted more than twenty years and allowed me to paint in Europe every summer.

In 1951 my wedding to Kyra, of Russian origin, opened up for me an entirely new world and a new soul – the Slavic one.

To Marie Cuttoli, founder of the Picasso Museum, I owe the access to the Antibes Studio, which she generously offered me in 1955. The proposal was backed by Picasso himself who, demonstrating a great sense of humour, showed that he was largely relieved by the fact that I had not attempted to imitate him. In Vallauris he also permitted me to use his own kiln to cook my ceramics. The works created in the museum were exhibited in Paris where the French government bought an oil and a gouache.

In 1959 I was rewarded with the tide “Chevalier de la Legion d’honneur” and in 1971 with the higher honour of “Officier” for activities carried out in Europe and America. At that time I was called by Herbert Graf of the Geneva Opera whose later death coincided with the beginning of the serious illness that caused the death of my only great inspirer, my wife.

After that sad event I remained disorientated for a long time and when I recovered, I turned my back on Geneva, but still without any aim in my life.

Then two things smiled at me – a woman whom I met again after forty years – and a lake here in Ascona.